December 9, 2013
The ICT Agency of Sri Lanka (ICTA) has decided to amend the eGovernment policy appropriately. Valuable deliberations and inter-action by eGovernment stakeholders took place recently for arriving at a new e-Government policy for Sri Lanka to embark on an era of better governance soon. That was when the workshop themed ‘eGovernment for good governance’ hosted by ICTA was held at Hotel Galadari, Colombo recently (3 Dec). A large number of Government Institution heads, Chief Innovation Officers (CIOs), representatives from Academia, the private sector and other institutions participated in the workshop. The event included addresses and presentations on ‘Background and introduction to new eGovernment Policy’, ‘eGovernment Policy – Vision and Overview of Policy’ and ‘Introduction to review process’ by the Review Committee. This was followed by group activities and group presentations comprising ratings of policy clauses with regard to qualities like clarity, applicability and implementability.

The first eGovernment policy in Sri Lanka ‘the ICT Policy and Procedures for the Government (eGovernment Policy)’ was initially approved by the Cabinet of Ministers on 16 December 2009. It was to be implemented by all Government organisations including ministries, Government departments, provincial councils, district secretariats, divisional secretariats and local Government authorities. 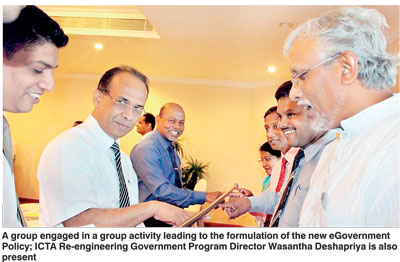 With rapid changes in the technologies and with the advancement of eGovernment implementation, it is required to review and reformulate the eGoverment policy. Even at the time when the policy was approved, it had been identified that the policy should be dynamic and should be amended as and when necessary. In order to achieve this objective a committee comprising senior government officials, Chief Innovation Officers, academics, technologists and eGovernment experts have been set up to review and reformulate the eGovernment policy.

Although the first eGovernment policy came into force in 2009 with the cabinet nod much behind-the-scenes work had been done in 2007 and 2008 as well towards formulating an appropriate eGovernment policy. In this endeavour ICTA availed itself also of developments in the field overseas.  Many governments and civil societies had identified eight key goals/pillars as the primary objectives of Good Governance.

Objective 4– Use eGovernment to eliminate duplication in ICT Infrastructure, information collection, government processes and ICT solutions within and across government organisations 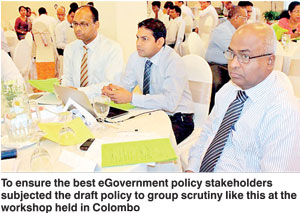 Objective 5–Use of ICT to achieve, measure, monitor and publish defined service levels for all government services

Objective 6 – Address the requirements/needs of marginalised communities through ICT

Objective 9–Strengthen rule of law through the use of ICT

For view of the draft new eGovernment policy and expression of views log on to http://egovpolicyen.engage.icta.lk/. Views of stakeholders are welcome till 31 December 2013.