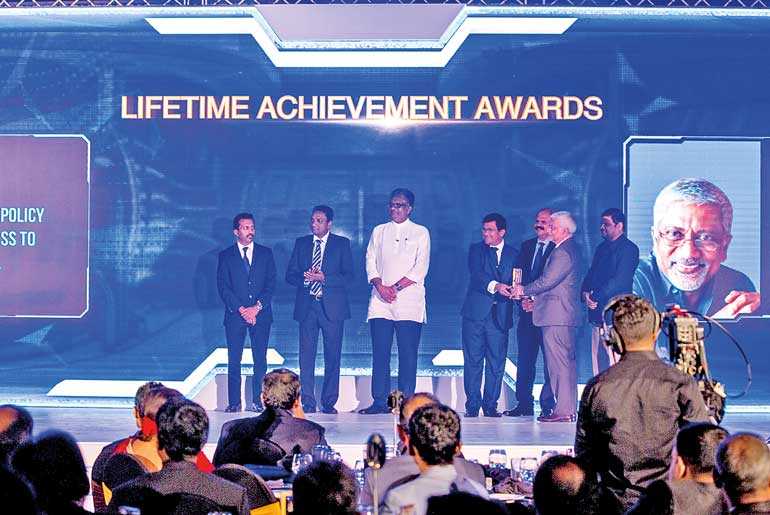 The award was given him “for the yeoman contribution he has made over the years as a public policy maker and advocate to influence access to cost-effective and high-quality digital infrastructure for all Sri Lankans.”

“The SLT Zero One Lifetime Achievement Award pays tribute to a distinguished and select group of visionaries, leaders and luminaries; who have made significant contributions toward the development and advancement of the digital environment at National and/or Global level,” according to the award citation.

“Considering this is a lifetime award, I looked back to when I started in telecommunication in the 1980s,” Prof. Samarajiva said on receiving the award. “At that time Sri Lanka had 61,500 direct exchange lines and 82,000 telephones. Today we are talking about people using apps and services in the millions. This was the result not of any one person’s actions, but a large process that many people participated in. I’ve been fortunate to be a part of this process and I am thankful for the people who made it possible.”

Prof. Samarajiva was Director General of Telecommunications in Sri Lanka in 1998-99 during which time the foundation for a competitive telecom sector were laid. He was also Team Leader at the Sri Lanka Ministry for Economic Reform, Science and Technology (2002-04) responsible for infrastructure reforms, including participation in the design of the USD 83 million e Sri Lanka Initiative. From 2003 to 2005, he served as a founding director of the ICT Agency of Sri Lanka, the apex body for information and communication technology within the government of Sri Lanka. He currently serves the ICTA as Chair, and Sarvodaya (Sri Lanka’s largest community-based organisation) as Senior Advisor on ICT.

It was in September 2004 that he founded LIRNEasia, to gather scientific evidence for policy-making in the telecommunications sector and related areas. By October 2005, LIRNEasia were recording policy impact in Sri Lanka, starting with the Telecommunications Regulatory Commission (TRCSL) applying LIRNEasia recommendations on CDMA frequency assignment. LIRNEasia research was cited in the Sri Lankan parliament in September 2007, during a debate on mobile subscriber taxation.

“Rohan’s contributions to the ICT sector go well beyond Sri Lanka,” said Helani Galpaya, CEO at LIRNEasia, the regional ICT policy think-tank founded by Samarajiva in 2004. “He is someone who has managed to change the terms of the public discourse in the region, prompting others to act in ways that reduce cost and increase equitable digital access to all. And he has done so based on evidence. The International Communication Association recognised his contributions nearly a decade ago when they awarded him the Communication Research as an Agent of Change award in 2009.”

In 2006, Prof. Samarajiva began making policy impact through evidence provided by LIRNEasia research, starting with infrastructure sharing in India to significant price reductions in leased-line tariffs and Internet retail prices in Indonesia in 2007. In 2008, broadband prices in Pakistan dropped by 64% following Pakistan Telecommunications Authority (PTA) engagement with LIRNEasia on the same. In the same year wholesale leased-line prices in Indonesia fell by 73% in a domino effect started off by a LIRNEasia presentation on Indonesia-India comparisons. LIRNEasia also provided feedback to Bangladesh Finance Minister’s proposal and to a Bangladesh Telecommunication Regulatory Commission (BTRC) proposal, supporting removal of a mobile tax and mobile value-added service (VAS) licensing. More recently, Prof. Samarajiva was instrumental in LIRNEasia work that led to broadband and accessibility for person’s living with disability being included in the Universal Service Fund policy of Myanmar.